A partnership between Maritime and SpeSeas: Coral Reefs of Northeast Tobago.

In celebration of World Environment Day on the 5th June and World Oceans Day on the 8th June, we would like to shine a light on some of the work we have been doing in partnership with the local NGO, SpeSeas, aimed at connecting our people to our coral reefs, and raising awareness for the important role these ecosystems play in our lives.

Maritime in partnership with SpeSeas and Underwater Earth is working to develop The Maritime Ocean Collection. This will be the first online library of photos and videos showing coral reefs all around Tobago. It will be available for individuals, communities, schools, NGOs and companies in Trinidad and Tobago, and anywhere in the world, to view and to use for science and education. A visual information platform, it will be a powerful advocate for marine protection and conservation.

As part of her work to create a new record for The Maritime Ocean Collection, Anjani Ganase of SpeSeas dived coral reefs in southwest Tobago. This is the first time she is observing these reefs through the eyes of a scientist. She compared what she saw with descriptions by Richard Laydoo from the Institute of Marine Affairs during the 1980s, about 35 years ago, in the book, A Guide to the Coral Reefs of Tobago.

Diving in the southwest Tobago is a hotter and sunnier experience, compared with diving along the steep edges of the main ridge in the northeast. The brightly lit waters and whiter sand give the coral reefs a picturesque ambience, but the coral reefs here also display a complex history of disturbance and some surprises.

Along the southern coast, Flying Reef is exposed to the Atlantic Ocean with the strong currents which gives the reef its name. Flying Reef sits about 1 km offshore and runs parallel to the airport runway, but while planes were talking off to the east; divers would be swept to the west. Laydoo in 1984 described Flying Reef as a gentle sloping reef littered with sea fan and soft corals fluttering in the current. The most prominent feature here was the dominant star coral, reef builders that layered the seascape along with Elkhorn corals branching up towards the surface, while giant barrel sponges lined the reef base.

While the hard coral infrastructure is still present, diving on this reef today is a very different experience. Large sections of the reef framework appear to have been converted to rubble, and the hard coral has been replaced by macroalgae and sponges on much of reefscape. Bright yellow and purple sponges congregate around the bases of sea fans and soft coral plumes as well as the brain corals that still occur. Massive barrel sponges were still spotted along the deeper sections of the reef. Sponges, in general, make up a large portion of the reef community. The fish life at Flying Reef, however, is still very impressive: it is the only reef where a black tip reef shark was spotted; adult Parrotfish were common, including the large Rainbow Parrotfish not seen anywhere else on the island and a rarity on many Caribbean reefs. Large schools of grunts and chub would gather around the existing coral mounds. 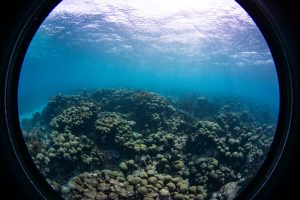 Coral Gardens Reef sits behind Buccoo Reef in the Bon Accord Lagoon. This reef is made up of boulder star coral (Orbicella annularis) and home to large schools of reef fish. Photo by Anjani Ganase | The Maritime Ocean Collection

From Buccoo Bay, Buccoo Reef extends southwards arching its way to Pigeon Point. It is a unique reef system seen nowhere else in Trinidad and Tobago and is special because it is a natural beauty, primarily because of the growth of the hard corals. The sheltered mangroves and lagoon persist because of the protection afforded by Buccoo Reef. Another unique feature of Buccoo Reef is the presence of back reef and patch reefs occurring in the lagoon behind the reef. Laydoo described the presence of many reef patches as consisting of thickets of branching corals such as the fragile Staghorn as well as finger coral. Pockets of vibrant life within the lagoon. However, even back then, there were fields of coral rubble along the reef flat because of storm and anchor damage as well as over twenty years of walking on the reef. Thirty years after Laydoo’s observations many of the patch reefs do not exist. Yet, the famous patch reef, known as Coral Gardens composed of primarily of star corals, still sparkles below the surface in a relatively healthy state.

The Buccoo’s seaward slope is a more depressing scene. Here is how Laydoo described the outer and eastern sections of Buccoo Reef:

“Generally, the reef crests, particularly at the Outer and Eastern reefs, are emergent or exposed at low tide. The fauna of the reef flats is composed mainly of elkhorn coral, finger coral, fire coral and sea carpet (palythoa).”

The section of reef where the Elkhorn corals once dominated is now a barren zone. It’s strange that the skeletal remains of Elkhorn still stand out against the blue water as if they died yesterday; nothing significant has grown over them, only turf algae and come calcifying algae. It’s as if the reef has been suspended without regrowth or recovery. During the 1970s and 80s, Elkhorn corals across the Caribbean were wiped out by disease.

As we moved farther down the reef slope, the coral and marine life resemble what was described by Laydoo, with the boulder brain and star corals occurring in deeper water:

“the forereef, characterized mainly by large boulder-type formation of the brain and star coral slopes gently to merge with the sandy seafloor”

This swim through at Mt Irvine Wall is a hideout for schools of juvenile reef fish. Video by Anjani Ganase | The Maritime Ocean Collection

Continuing east, one bay over from Buccoo is Mt Irvine Bay. The eastern section of the Mt Irvine Bay near the headland is one of the most popular surf spots on the island but below the waves is a well developed coral reef. As you round the point into Back Bay, the reef structure ebbs and the fish frequent the rocky outcrops; the submerged cliff and crevices a natural refuge for schools of juvenile fish. Sections of Mount Irvine reef still resemble Laydoo’s descriptions with conspicuous colonies of boulder brain and star corals, but large sections of reef slope have become overrun by swaying soft coral plumes. The most fascinating feature of this reef is the structure itself. It was amazing to peer through the lattice of the reef framework. At 10 m depth at the top of the reef, I spied a network of tunnels and corridors extending at least another 10 m into the reef; a sort of reef underworld created by years and years of hard corals growing on top of each other. The fish used these secret passageways to escape my camera lens 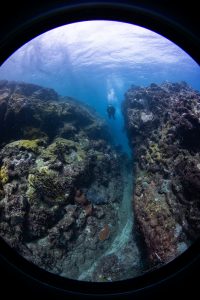 Farther north of Mt Irvine lies the small bay, Arnos Vale. Most of the reef lies within the shallow bay and does not extend far beyond it. The beauty of the bay was as described by Laydoo, a meadow for the branching Elkhorn coral and a plenitude of fish living among it, making it a favourite snorkelling site. Unfortunately, few of these corals exist today, yet there is some reef life within the bay. Laydoo described the reefscape outside the bay consisting of submerged rocks and boulders with little hard coral growth. There may be something that naturally limits coral growth on these rocks, as they lack coral growth to today. Taking a closer look, you can find encrusting sponges, fire coral and sea fans coating surfaces of the rocks. The seascape is beautifully structured with rocky canyons and swim-throughs where reef fish congregate.

Culloden reef is located farther north of Arnos Vale. The reef spreads out seaward from the two headlands of the bay and, connecting in the middle, creates a horseshoe shape. This unique reef system developed a spur and groove formation as a result of moderate wave energy moving along the coastline. This reef features spurs that spread out like fingers along the seafloor because of the

growth and accumulation of hard corals. In between the spurs are narrow sand channels where dissipating wave energy moves sediment and rubble down the slopes to collect in these grooves. Laydoo remarked on the pristine conditions of corals that made up the spurs of Culloden Reef compared to other reefs on the island, with the presence of fish and shark life that gather in the grooves. He recommended that it be designated a scientific reserve to be studied further.

Today the reef structure is still impressive and while some hard corals continue to grow along the spurs, there is now heavy competition with the sea fans and rods that overshadow, brush and scour the star boulder corals. We did not find any sharks in the sandy grooves, instead a hoard of lionfish lurking under coral overhangs.

You can read more on the partnership between Maritime and SpeSeas at www.speseas.org/the-maritime-ocean-collection/.