Dr Anjani Ganase begins the exploration and photography of the coral reefs of Tobago for the Maritime Ocean Collection at Charlotteville.

Coral reef research in Tobago began in the late 1970s and 80s, right around the time when Trinidad and Tobago established the Institute of Marine Affairs. I was told of young scientists roaming the Tobago coastline by boat to explore reefs farther east along the Caribbean coastline to discover something other than Buccoo in the southwest. Even back then, Buccoo reef was heavily impacted by pollution from coastal development in the area. Coral reefs in northeast Tobago were more removed from disturbance, but also never thoroughly explored and surveyed (at least by local scientists). Researchers from the Institute of Marine Affairs, such as Richard Laydoo and Doon Ramsaroop were some of the first to map coral reefs in northeast Tobago.

When the surveys were carried out in the 1980s, many Caribbean coral reefs were on the cusp of change. White band disease had plagued most of the Caribbean branching corals – Elkhorn and Staghorn corals – and the regional die off of important reef grazers – the sea urchin (Diadema antillirum) – had already affected some of the local populations. Yet, many coral reefs in the northeast were still in a fairly healthy state and being proposed as diving tourism destinations with proper protection and management. In 1981, Doon Ramsaroop mapped and surveyed the coral reefs of Man o War Bay. Today we visited the same reefs to find out how much has changed.

Charlotteville has five main fringing reefs within Man o War Bay. The most prominent and extensive occurs between Booby Island and the main island. Corals fringe and fill in the underwater space between the rocky shoreline and the outcrop rock; the reefs slope to the east and to the west. The second major fringing reef flanks the sides of Pirates Bay. Near to the beaches are two small patch reefs – Turpin and Rest House reefs. 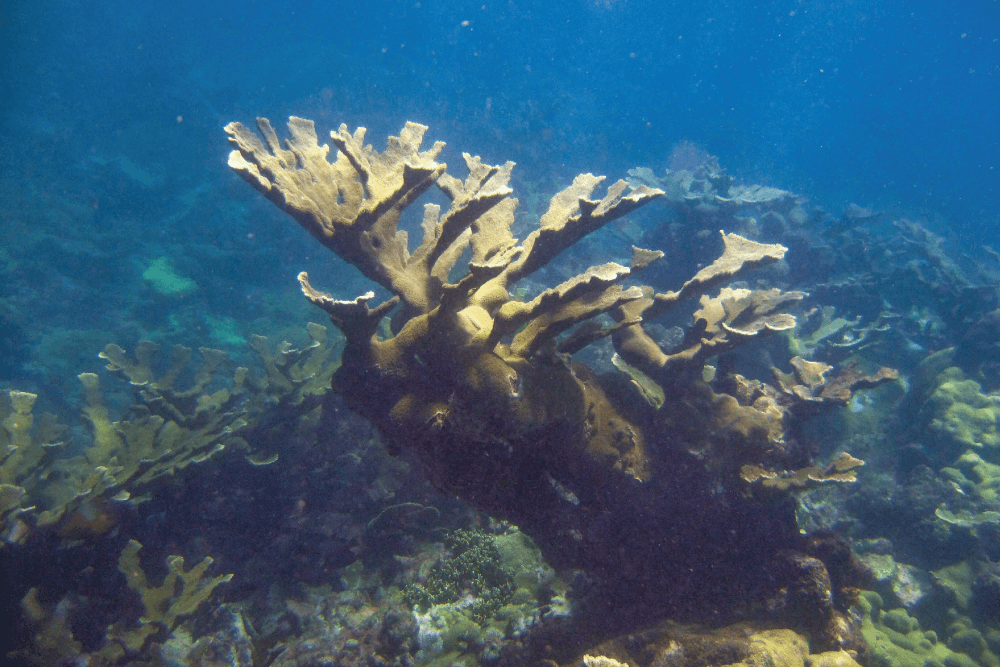 Ramsaroop described these reefs as full developed especially in the shallow areas. Along the shallow margins of Booby Island, the tips of the dominant branching Elkhorn coral (Acropora palmata) extended to just below the surface of the water column. Even though Elkhorn coral dominated the shallow spaces, there were a few gaps in the latticework where smaller colonies of brain coral and soft coral species managed to successfully establish themselves.

“The reef top is generally less than one metre below the surface near shore, and gradually deepens as it extends seawards to depths of between 2 and 3 meters near Booby Island. The dominant coral species is the Elkhorn coral, Acropora palmata, which appears as an impressive, though monotonous, formation. However, occasional small colonies of the Octocorals (soft corals), and the Stony corals, Diploria (brain corals)…”

As you descend down the reef slope, the Elkhorn coral thickets gave way to a more diverse coral reef with the presence of the more fragile Staghorn coral (Acropora cervicornis), but many other species also occurred including the mountainous boulder star corals, as well as numerous plating and boulder brain corals. At even greater depths (7 -15 m) the hard corals gave way to a sloping field of soft corals that fringed the sand bottom.

Today the reefs around Booby Island are completely changed. They now sit deeper in the water column as there are no Elkhorn corals in the shallows reaching for the surface. Save for one or two

eroded skeletons of Elkhorn coral, there is no evidence of their existence. Replacing Elkhorn in the shallows along with the rigid lattice is now a reef dominant in soft corals. However, in between the swaying plumes of soft corals, some coral species appear to still manage to stand their ground against the encroaching soft coral. On the western side of Booby Island, brain corals and boulder star corals are slightly more prominent. At greater depths, the more fragile branching Staghorn coral Acropora cervicornis was no longer found, although another small stand of Staghorn coral does exist in another part of the bay. It is likely that the soft corals spread from the depth when the Acropora colonies died off, and there is no longer a distinct depth zonation of coral life. Instead there is a gentle sloping soft coral meadow from reef flat to reef base, signalling low structural diversity on the reef.

Although similar to the reef zones of Booby Island, Pirates Bay had some distinctions. The shallow (less than 2m) reef was also dominated by Elkhorn coral thickets, but there were also large patches of soft corals occurring in the shallows. Farther down the gently sloping reef, coral life became more diverse transitioning to a mix of hard corals of variable shapes – boulder, encrusting and plating growth forms in addition to sea fans. 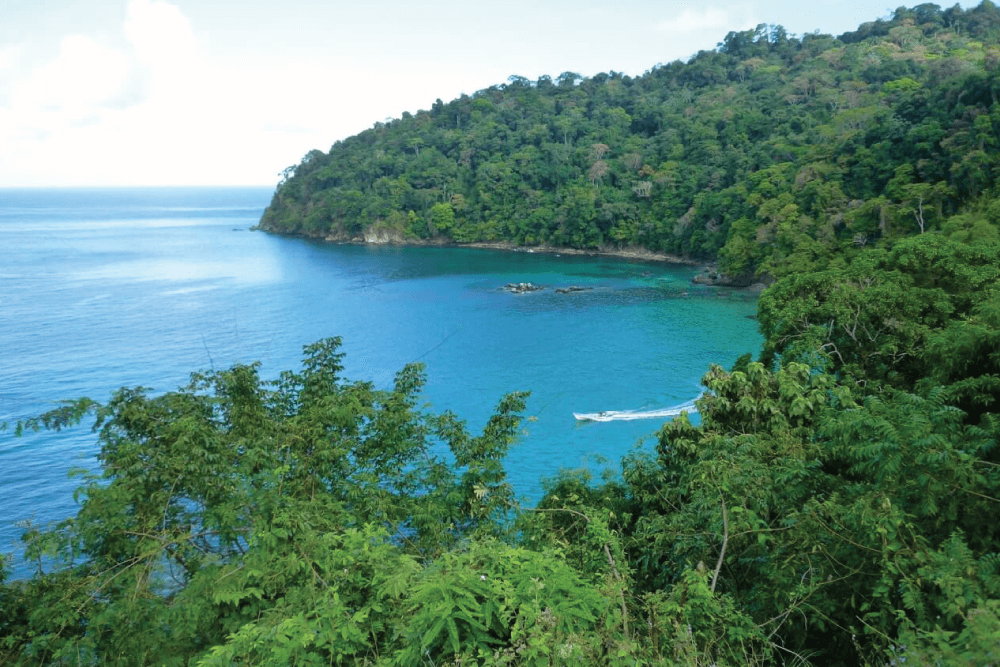 Although the reef running north from Pirates Bay lacked Elkhorn corals, the shallows were not taken over by soft corals, as was seen on reefs around Booby Island. Instead much of the surface of the reef appears to be covered in turf algae, yet still housing diverse reef benthic organisms such and invertebrates, sponges and corals. There is an area that may resemble what a reef in the 1980s looked like: we came across an area of Elkhorn coral about 80 m² at about 5 m depth, with a vibrant fish community living among its branches. We can only imagine how this may look for the whole reef, and with greater density!

Unfortunately, the observations made by Ramsaroop in 1981 occurred just before the mass die off of branching Acropora corals throughout the Caribbean from white band disease; and Tobago’s reefs did not escape this devastation. This was followed closely by the regional die off of the sea urchin Diadema antillarum, a dominant herbivore on Caribbean reefs responsible for controlling algae. The loss of these two essential reef components along with other local disturbances have shifted many hard coral dominant reefs to soft corals and algae as seen at Booby Island and Pirates Bay.

For Charlotteville, protecting what’s left is as crucial today as it was over 30 years ago, especially sites that still host the ecologically important branching species that survived the disease. Climate change will continue to push coral reefs to the edge of existence and we can no longer rely on natural resilience to determine what survives; we need to actively work to protect all parts of the marine environment against disturbances.