Make Your Money Work For You

Meet the ocean champions, a team of scientists dedicated to marine research and eager to share their passion and knowledge!

When the group of marine scientists was deciding that a unified approach would serve them all, the name SpeSeas was both unique and collective. It felt right to Diva Amon, the Trinidadian marine scientist who was already accruing international acclaim for her work in deep sea exploration.

Diva has been around the world exploring the deep oceans with the use of remotely operated vehicles (ROVs). In Antarctica (2012), she was exploring hydrothermal vents. The next year, she was in the north Pacific area known as the Clarion-Clipperton Zone where many previously unknown species were found. She was with a team exploring cold seeps off Tobago and Grenada in 2014; the Mariana Trench in 2016; and the Mid-Atlantic Ridge off Brazil in 2017.

Diva said, “As less than 1% of the deep ocean has been explored by humankind, much of my research characterises what species live where, why they live there, how they interact with each other, and what functions they play. … You can’t protect what you don’t know or manage what you don’t understand!”

Diva was determined to increase knowledge through a coalition of like-minded scientists.

SpeSeas was incorporated in November 2017. The vision and aims were simple: to collaborate for awareness of the marine world, and foster research and science-based solutions for small island states like Trinidad and Tobago. The scientists who form the core of SpeSeas are Diva, Michelle Cazabon-Mannette, Ryan Mannette, Farahnaz Solomon, Jahson Alemu I and Anjani Ganase. The SpeSeas mission is to “use science, education and advocacy to enhance the integrity and resilience of coastal and marine ecosystems by influencing human behaviour.”

“We want to bridge the gap between the academic and the practical. We want to educate government agencies, students, the man in the street. It might be difficult for the average person to understand what the research is telling them. We want to provide the information that would be essential to decision-making.”

Jahson Alemu at work in Singapore:
collecting specimens on the Pulau Semakau reef

“We promote science-based advocacy for the marine environment,” said Ryan Mannette. “We want to bridge the gap between the academic and the practical. We want to educate government agencies, students, the man in the street. It might be difficult for the average person to understand what the research is telling them. We want to provide the information that would be essential to decision-making.”

SpeSeas created their first outreach programme in recognition of coral reefs, which have been subject to bleaching since 1980s. The International Year of the Reef TT (IYORTT) was a collaboration with Government agencies and other NGOs, launched on World Oceans Day (June 8) 2018. IYORTT brought awareness of Trinidad and Tobago’s reefs and how we might help to protect them. The year-long event brought together students, teachers, corporate TT, vulnerable groups, creatives, around field trips, screening the film Chasing Coral, discussions and virtual dive experiences.

It seemed logical to follow this in 2019 with a survey of the coral reefs around our country, most of which are in Tobago. The Maritime Financial Group sponsored the expedition and now hosts the library of images at maritimeoceancollection.com. Here’s the opportunity to view and “virtual dive” the reefs of Tobago from anywhere in the world.

The Maritime Ocean Collection was led by Anjani Ganase, who was involved in development of the technology at the University of Queensland, Australia. SpeSeas partnered with Underwater Earth for the use of a 360-degree imaging camera to document the Tobago reefs.

Anjani regards the Maritime Ocean Collection as a big step towards exposing Trinbagonians to the benefits of the ocean: “The ocean regulates our climate. It provides us with oxygen, while removing carbon dioxide from the atmosphere. Our ocean is a major source of food – fish, shrimp, lobster, conch, crab - and our coral reefs provide shelter from wave action and sand for beaches.” 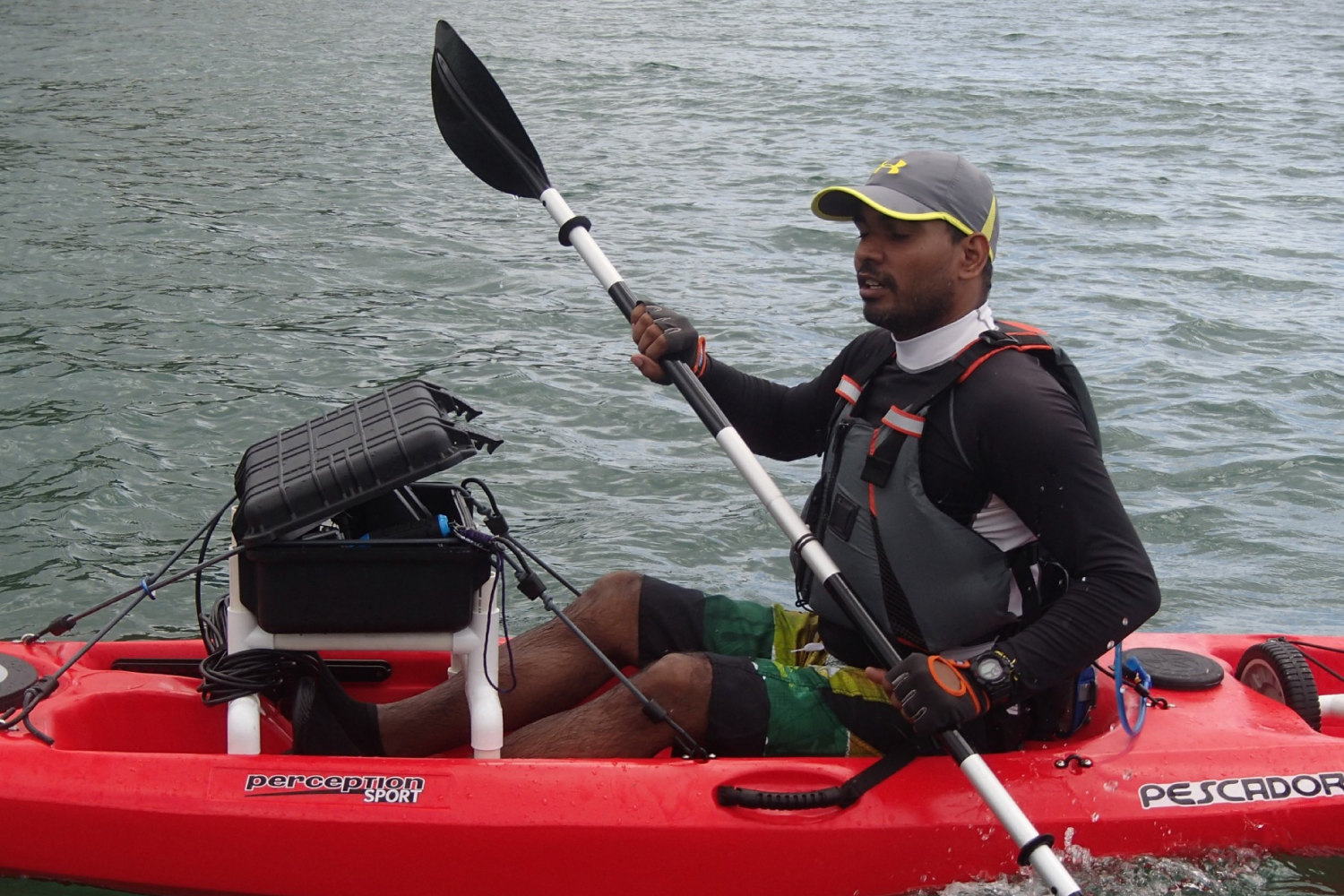 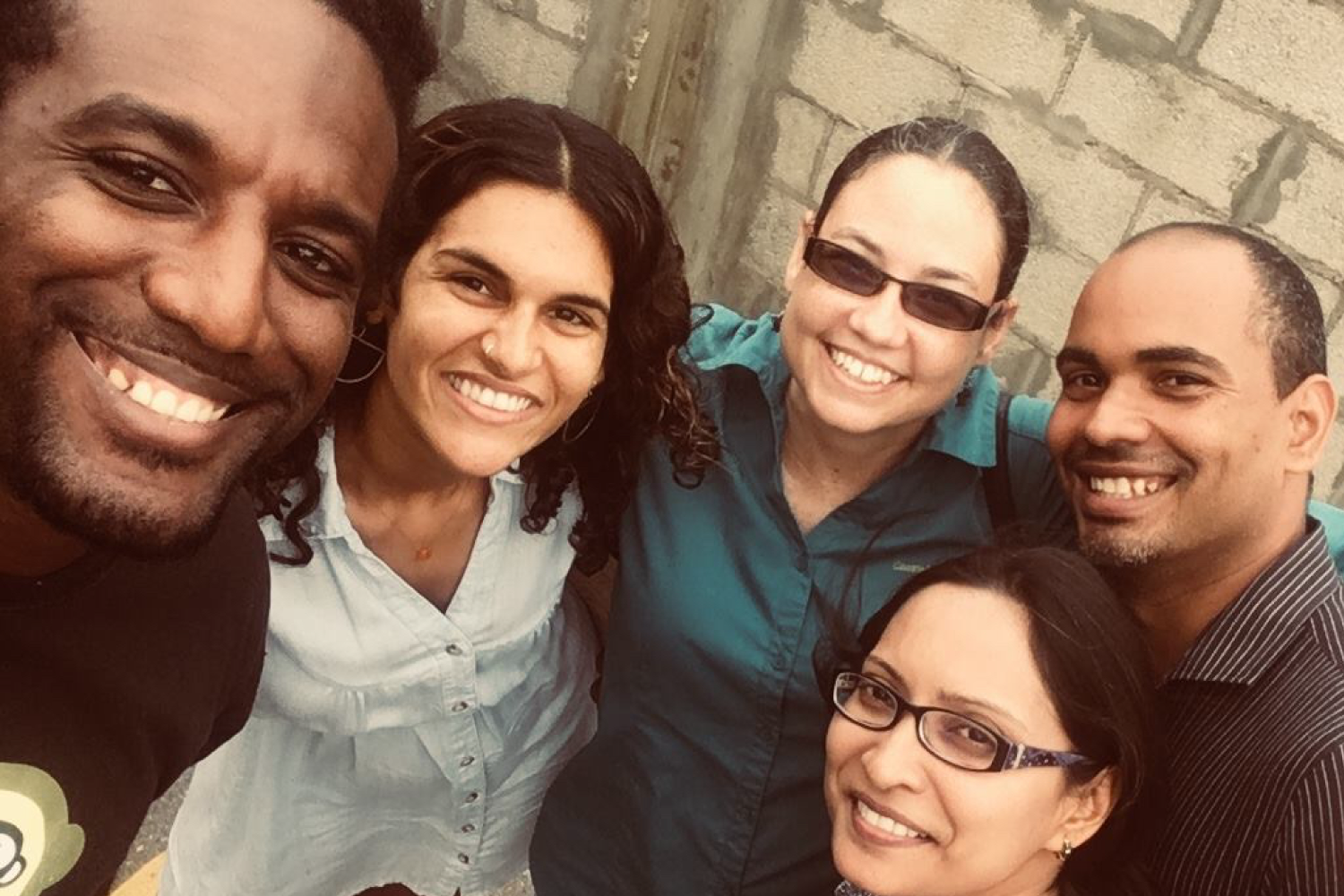 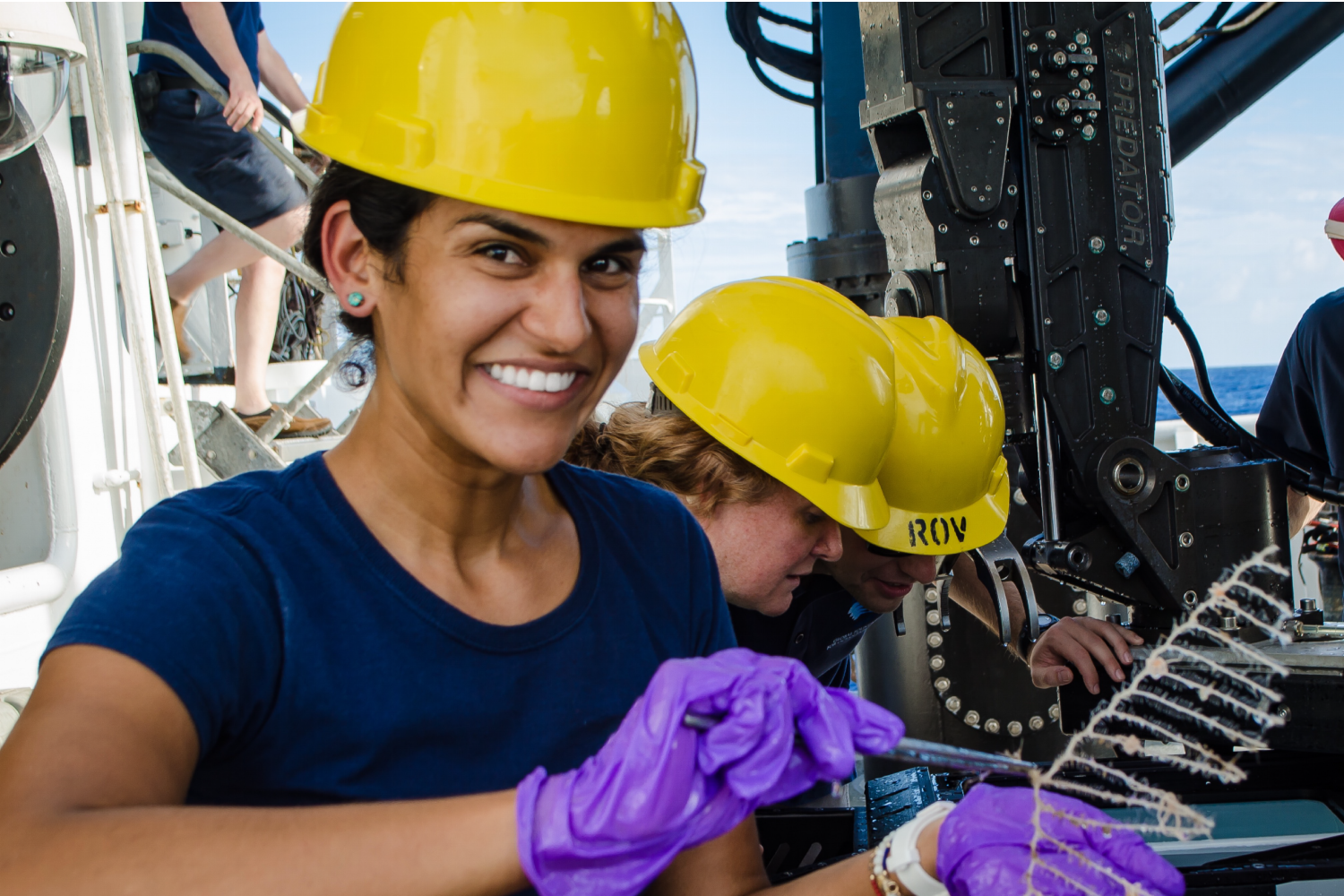 With equal passion and persuasiveness, Michelle Cazabon-Mannette has pursued sea turtle research for over ten years. She followed sea turtles into the ocean – into seagrass beds and on coral reefs around Tobago; then continued her research on nesting turtles. The Leatherback might be the main feature on many nesting beaches, but Michelle has pushed for research on Hawksbills, Greens, Loggerheads and Olive Ridleys on the beach and at sea. With her husband Ryan, she is part of many turtle rescue efforts. In partnership with ProTECTOR Inc in Honduras and SOS Tobago, Michelle and Ryan introduced through SpeSeas, a sea turtle citizen science application that encourages divers to report sightings of sea turtles with photographs, TURT. The programme is targeted to divers around Tobago.

Michelle continues to champion turtles and their habitats: “…given what we know about sea turtles, are we willing to change how we use them now, including foregoing some of the benefits they can provide, so that in the future, sea turtles can be enjoyed in multiple ways by future generations?”

Change begins with enjoyment and education; and each member of the team loves working in the ocean. They are all eager to share information: Michelle on turtles, Diva on the deep ocean, Jahson and Anjani on coral reefs, Farahnaz Solomon on fish and fisheries.

Farahnaz worked in fisheries in Trinidad with the Fisheries Division, and in Tobago at the Buccoo Reef Trust. She would like to see more efforts to manage local fisheries, many of which are over-fished. As a scientist, one of her most rewarding moments was when the results from her research on the mullet fishery in Claxton Bay were used by the local authorities to manage the fishery. She said, “Every scientist would like to know that their work has value and has somehow made a difference, however small ...” She sees an important role for SpeSeas in helping communities that depend on the ocean to understand how their actions - destroying the reefs, over-fishing, catching juvenile fish and polluting - damage the resources they depend on for survival.

“The Maritime Ocean Collection is poised to be expanded into schools with educational and outreach material. It is in the frontline of image-building and social media identity for SpeSeas and the main partner, the Maritime Financial Group. "

Michelle Cazabon-Mannette with a hawksbill turtle in Tobago

Jahson has worked on the coral reefs of Tobago, working with communities and the STATE to better understand how changes in biodiversity are affected by and affect how we use coral reefs, including losses due to coral bleaching, invasive lionfish or physical damage. His work has taken him to Singapore, where he is evaluating how seagrasses and mangroves help to remove carbon from the atmosphere to mitigate climate impact in cities. At the same time, he is quantifying the values people place on coral reefs for recreation, fishing, family, science and aesthetics, and how these values can be incorporated into management. He expects to be back home in Trinidad and Tobago in March 2021.

The Maritime Ocean Collection is poised to be expanded into schools with educational and outreach material. It is in the frontline of image-building and social media identity for SpeSeas and the main partner, the Maritime Financial Group.

One SpeSeas learning experience came from the project to explore the waters off Trinidad and Tobago using deep sea drop cameras. The project “My Deep Sea, My Backyard” was shelved when the cameras failed. Scientific exploration of our deep waters requires expensive technology and remains in the forefront of SpeSeas plans.

Diva said, “The economy of Trinidad and Tobago currently relies on oil and gas, and our reserves on land and in shallow waters are running low. As a result, we are being forced to explore deeper waters for new reserves, with exploitation expected to begin (soon). .... This is especially tragic as science is struggling to catch up and we may lose species and habitats before we can study and understand them.” 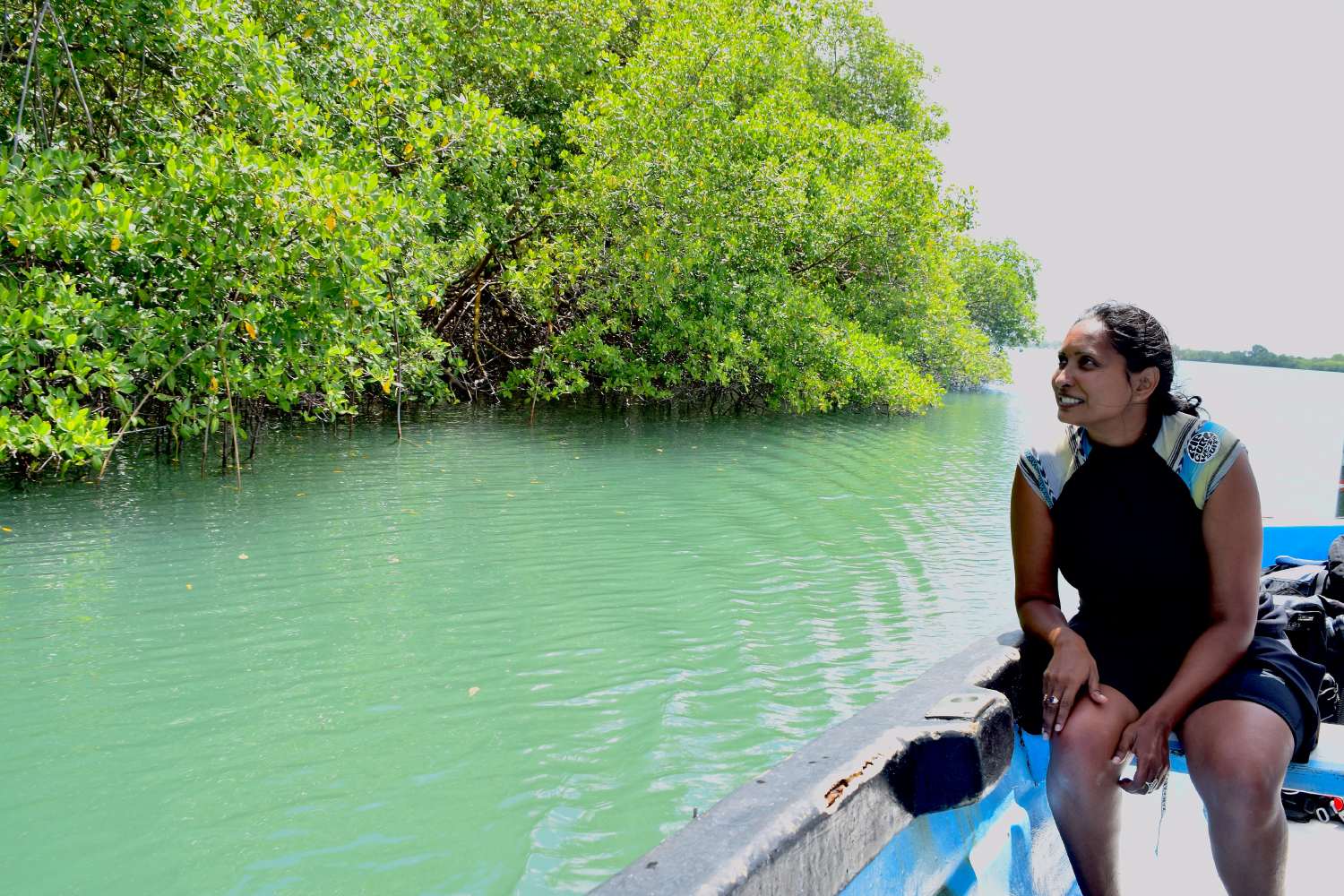 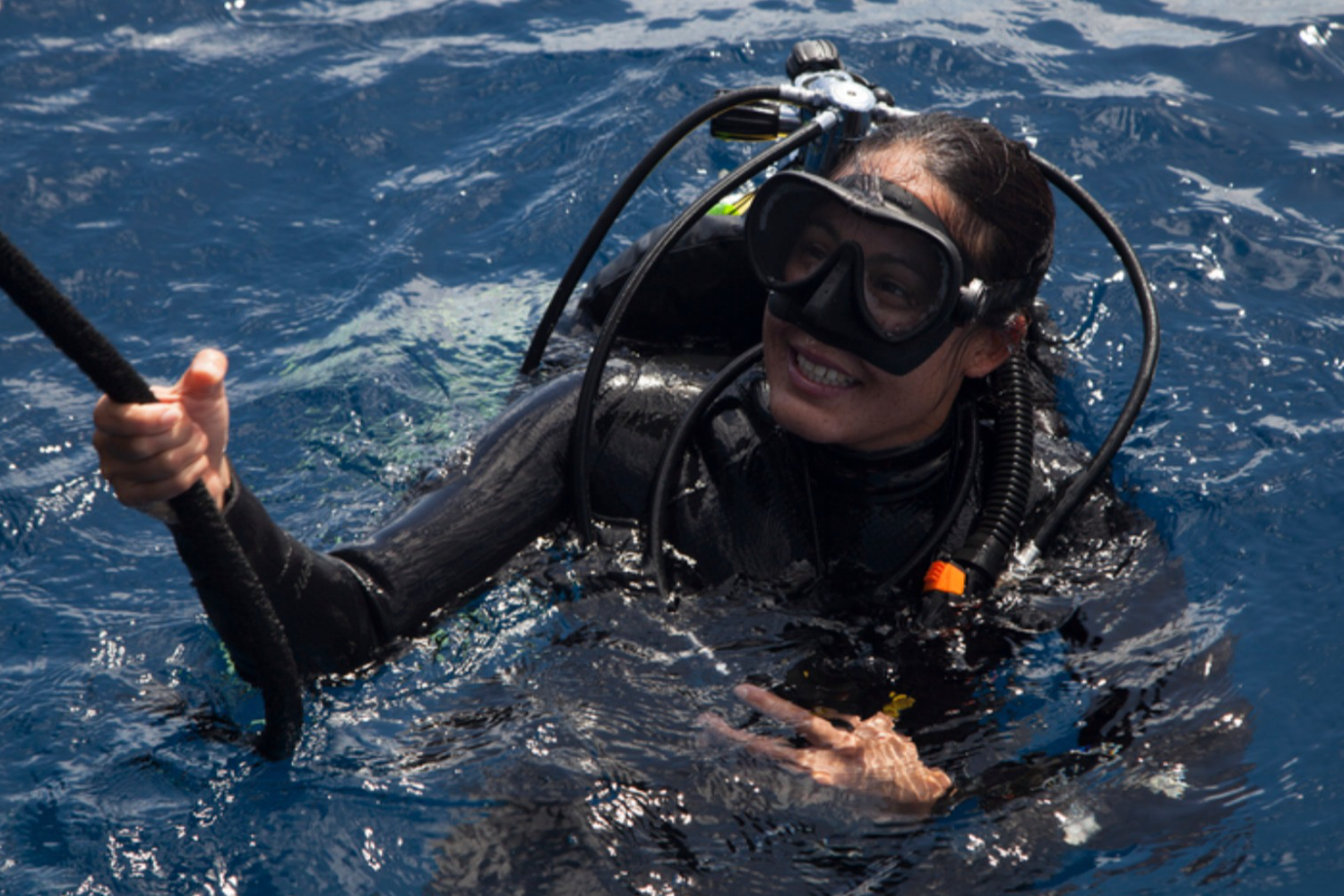 The job of SpeSeas might be equal parts research and outreach. Ryan is well positioned for both. He completed the study, “Detecting Marine Turtles using Side Scan Sonar”, for his master’s degree. He has been a GIS (Geographic Information Systems) practitioner for over 18 years; and a coordinator for the NIHERST Caribbean Youth Science Forum for 13 years. “Young people need to be exposed to science and technology. Many of them are not aware of the huge scope and innumerable opportunities that exist. And I am happy to help expand horizons.”

His happiest role is as ocean guide for his two-year-old son: “Ciaran is a water baby. He has been exposed to the ocean with Michelle and me. We want him to love his environment as much as we do. As parents, we are not pushing him, just allowing him to understand and love, and in time, to protect what he loves.”

The SpeSeas mission might seem like raising a child that must be strong, resilient, self-sustaining. Then the work of SpeSeas becomes clear: to encourage humans especially, children, to explore and engage with the ocean with love and curiosity. Recognising that this and the next generations will always be reaching for answers, SpeSeas hopes that our species, the collective, might create the ark that will indeed save all species.